The "Kyobo eReader" was unveiled this week in Seoul and will reach South Korean consumers as early as Dec. 1, Kyobo Book Centre officials said Thursday.

The e-reader features Qualcomm's 1.0 GHz "Snapdragon" processor, a custom Kyobo application based on Android and a 5.7 inch "XGA" mirasol display.

The mirasol display uses ambient light instead of its own in much the same way that a peacock's plumage gets its scintillating hues. Qualcomm's mirasols have already been used in a few Chinese and South Korean phones, and in an MP3 player on the U.S. market. The display contains tiny mirrors that consume power only when they're moving, easing battery drain. Mirasol displays also quickly change from one image to the next and show video.

The introduction of the e-reader jointly developed by Qualcomm and Kyobo signals increasing competition in the global market for tablets.

U.S. online retailer Amazon.com Inc. and bookseller Barnes & Noble Inc. have recently released tablets of their own, Kindle Fire and Nook Tablet, and are challenging Apple's iPad in pricing.

Qualcomm CEO Paul Jacobs noted South Koreans' near-100 percent literacy rate and digital reading skills during a launching ceremony in Seoul on Tuesday, according to the San Diego-based company. Fifteen-year-old South Koreans scored highest in their ability to absorb information from digital devices, according to a 2009 study by the Organization for Economic Cooperation and Development. Over 80 percent of households in South Korea have broadband Internet access.

The e-reader featuring the mirasol display will be priced at 349,000 won, or $302, said Seoul-based Kyobo, South Korea's largest bookseller. 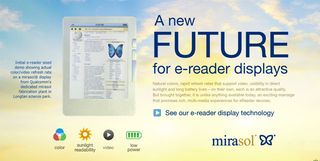